A Poor Harvest Focuses The Mind 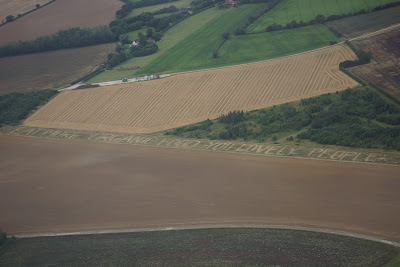 All the signs were there earlier in the season that it was going to be a bad one. A relatively mild winter, a drought in early spring followed by a cold wet April and then a wet, cloudy early summer, not a great recipe for a bountiful organic harvest. Not that most of my wheats had much flag leaf left on them to benefit from the anticipated sunny grain filling period, neither had my beans which had started defoliating earlier than ever before. April had put pay to any green leaf area with the worst levels of yellow rust and chocolate spot I have ever seen. While organic livestock farmers are able to dip into the conventional medicine chest to alleviate their animals suffering, my poor organic crops are not allowed the same respite.

Although a lot of what happened in last years growing season was beyond my control, I could be accused of farming organically with a conventional farmers head on in the name of profit with the resultant pitfalls. Even though you should never farm for the harvest that has just gone there are lessons to be learnt and inevitably systems to change.

With an arsenal of chemicals to control grass weeds, virus spreading insects and early fungal attacks it is possible and in fact preferable in terms of yield to drill in early September, but if you do not have that equipment, time will gradually deal you fields that are akin to a hay meadow rather than a cereal crop. The daughter of my harvesting contractor driving one of the grain trailers described the straw coming out of the back of her father's combine as "fluffy straw"...... I feel a black-grass straw marketing idea coming on......

Sowing cereals in September organically is just asking for trouble, in fact sowing before the middle of October is risky.

NIAB/TAG have being doing trial work over the last few years on winter bean sowing dates showing that there are considerable yield advantages to sowing beans in late September early October. With several hundred acres of beans to sow on this farm every year it is always tempting to get on with the work on my heavy soils as soon as we have finished drilling the cereals.

We have had some really good yields sowing beans in the early part of October but the two disastrous years (harvest 2012 was one of them) puts a big tick in the Don't Do It box from now on.

I have always tried to avoid too much spring sowing on this farm as the yields are usually lower and you don't want to be messing around on heavy soil in a wet March, but some spring drilling has advantages. Firstly it spreads the workload enabling you to risk later drilling in the autumn and possibly most importantly it allows you to get on top of mainly winter germinating grass weeds like wild oats and black-grass and gives you a different disease profile to autumn sown crops.

A bit more spring drilling is now in the rotation plan.

Organic Seed Producers have had an organic winter cereal trial on my farm for the last two years and what was outstanding in the trail this year was how well oats and triticale did in terms of yields and disease resistance compared to my wheat and barley. Not only that, because they are invariably double the height of other cereals they did a superb job of smothering grass and broad leaved weeds. My concentration on what the market wants in East Anglia for non-ruminant feed has selected some pretty nitrogen demanding and short weed producing crops and that is all very well if you are getting consistently good yields, but as soon as your weed burden starts to erode those possibilities it's time to check what you are doing.

I need to be more diverse in my cropping using the different characteristics of a range of cereals to improve the agronomy on the farm, but as importantly I need more eggs in more baskets.

So what about the things that are beyond my control, or are they?

At Wakelyns Farm near Fressingfield in Suffolk the Organic Research Centre (ORC) have been trailing wheat "composite cross populations". It's best to go on the website http://www.organicresearchcentre.com to find out what the real nature of these populations are but they are essentially up to twenty different wheat varieties all with different agronomic characteristics which have been crossed with each other meaning that no single plant is the same as it's neighbour. In fact it is claimed that no single plant is the same as any other wheat plant in the field!

Trials that ORC have done show that although the populations are not the highest yielding they are also not the lowest and in fact produce a consistent average yield. The secret is the diversity in the field having plants that perform differently under similar disease pressure situations unlike a varietal monoculture where all the plants do the same which is great in years of low disease pressure but a potential failure in a year that is not. Populations might not be the barn filler you are looking for but at least you will have something in the barn come harvest time.

A simple alternative to cross populations that could be tried by all farmers certainly for the animal feed market where variety is not specified, would be to sow a known blend of varieties. Although the genetic diversity would be far less compared to the ORC populations, it might be enough to buffer against a single variety going down with a disease and possibly lessen the impact of disease with susceptible varieties being further apart in the field minimising cross contamination.

The beneficial effect of less crowding of single varieties could also be used in different crops which could be separated after harvest across a gravity separator or by screening. Wheat and beans or barley and peas for example.

The general point is I need more diversity in my farming system to buffer against any crop failing, being it failing on yield, disease, weed suppression or fertility.

So it's onwards and upwards for harvest 2013.....that's if I can get hold of any organic seed with acceptable levels of fusarium in it, but that's another story.