Relax rules on home saved seed to save organic farmers 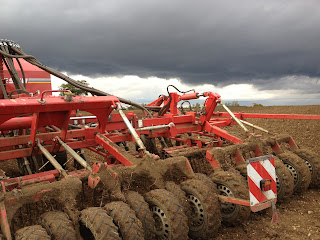 I know that getting seed for all autumn drilling farmers has been particularly testing this year, but for us organic farmers it has been near on impossible. Fusarium levels in nearly all organic cereals has had levels of the disease that you just wouldn't plant at and although we are told that if infected seed goes into a warm seedbed and can get away quickly, then the disease should have little or no effect. As I have been desperately trying to delay drilling trying not to encourage autumn fungal/insect attacks and also to get as much weed life to germinate so that it can be cultivated out, with the nights drawing in and the weather turning wet and colder the hope of that kind of seedbed is nigh on impossible.

To try and get over the problem I spent a couple of days ringing around all the seed companies I could think of trying to find any seed that had been carried over from harvest 2011 which would hopefully have a different disease profile and thankfully I have now got 90% of my seed in the barn.

But how do our certification bodies know if when requested for a derogation by Mr Organic Farmer to use non-organic seed that there is no organic seed available?

The information is found on a website called OrganicXseeds where all the organic seed suppliers list their wares and it is where the organic certifiers look as soon as a request rolls onto their desk. The website is only supposed to list seed that the suppliers physically have in stock and was set up specifically to aid seed derogations, but alas the site has been abused.

The organic seed suppliers hate derogations because it does enable farmers to buy non-organic seed rather than their organic seed when no organic seed is available and I can understand their gripe. Considerable time and money is spent by these companies securing varieties and conducting expensive trial work with varieties that would in the eyes of the seed producer foil any request for a derogation on agronomic grounds but an organic farmer is able to get a derogation if the seed is not available at the time that he or she needs to sow it.

To counteract the derogation what has been happening and still is happening even though complaints have been made to the Soil Association who are funded to run OrganicXseeds, is that seed suppliers are listing seed that they think that they are going to have, not actual seed in stock, meaning that it is almost impossible to get a derogation.

Even before harvest started I was fully aware of the amount of fusarium and indeed yellow rust in the ears of nearly all my wheats. I usually like to save some of my own seed in the name of cash flow, less food miles and attempting to achieve a closed farming system, but by the end of July I knew that we would be incredibly lucky to be saving any seed from our own farm.

Looking on the OragnicXseeds website there was of course a plethora of seed available from harvest 2012 even though not a single ear had been cut. When I rang and challenged  some of the advertisers that they were misusing the website and that they ought to go and have a look at their seed crops to see that there was little hope that they would be disease free, I was assured that seed would be available even though they did not physically have it at the time.

In early August I rang my certification body to ask if I could start ordering non-organic seed  and I was told that unless I wanted to sow the seed right now I would have to wait until nearer the time to see what organic seed was available. I have always been a fan of early drilling, but even I know that sowing winter wheat that early is folly.

So began the torturous wait as day by day the small parcels of disease free non-organic stocks we snapped up and gradually one by one the organic seed suppliers confirmed all my suspicions; they had no seed.

A meeting was hastily arranged at the Soil Association to try and solve the problem which was attended by Ruth Mason - Food Chain Advisor for the National Farmers Union and I and the great and the good of the organic seed industry but nothing could be done.

That was September, it’s now October.

I write this blog on my loader waiting to refill the seed drill with winter wheat seed and we are now onto our last few days of cereal drilling. I did manage to get enough seed through perseverance and with the huge help of non-organic and organic suppliers, but how do we prevent this crisis happening again?

Certainly OrganicXseeds needs policing much more diligently by the Soil Association but also should be frequently spot checked by all the certification bodies to ensure that their farmers and growers are being given the correct information.

But there is another possible way forward and ticks all “organic” boxes in the name of food miles, farmer to farmer cooperation and the aspiration to plant one hundred percent organic seed.

In the midst of this whole debacle an organic farming friend announced that he had eighty tonnes of Herewood wheat still sitting in his grain store from harvest 2011; organic, no fusarium, good germination and as local as any other seed supply. It seemed the perfect solution! Arrange for a lorry to pick up 29 tonnes of the stuff, get a seed cleaning company in, pay the royalty and bingo, everyone is quids in.

The only people cut out of the deal would be the seed producers which is not good. At a time when so little money is put into organic research and development we desperately need those seed producers who do that important trial work and support the organic industry.

The other major hurdle is that trading farm saved seed between farmers is entirely forbidden to protect those seed producers, but maybe there should be an EU derogation to allow this to happen in exceptional circumstances.

A possible solution might be that the law could be changed to allow farmer to farmer trading with the seed producer in the middle ensuring that correct seed standards were maintained i.e germination, disease levels etc. and organising the seed royalty to be paid to the correct breeder. The measure would only kick in if a situation arose like the one we have had this year.