There's Nobody on the Farm These Days 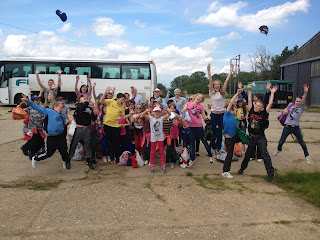 The biography at the top of this blog* says that I have "two full time staff" suggesting that I manage to farm this amount of land land with me and my two farm men David and Andrew without any other help. Well of course it's complete nonsense and arguably contrary to the claim that organic farms employ more people than non-organic ones. Shame on me.

Sitting outside the grain store as I write waiting for the next load of wheat to come in for me to push up and noticing the amount of traffic that flits around is a bit of a reality check of just how many people are actually on the farm. There is a glut either just before or at harvest time, and not all of the traffic I am seeing is directly connected to the business of farming but to pretend that this farm is a place devoid of souls is very wrong.

Aside from David and Andrew there is Peter who is one member of a family farm that we now contract farm, but is also my part time tractor driver and occasional builder-come-handyman.

Then we have another Peter and his mate who does all our hedge cutting, flying around the fields as soon as the crops are cleared trimming back the boundaries and cleaning the ditches.

And then there is the muck spreading gang with two muck spreaders and a further guy on the loader making sure that the vast spreaders are packed to the brim as quickly as possible and all under immense pressure from the next farmer on their list who is baying for their arrival while the weather holds.

This year I have contracted out all our harvesting and so we now have the harvesting team of Richard, with his son and daughter grain carting with a further younger son in the combine cab keeping Dad company as they trog on into the night, with mum going backwards and forwards with food and drink to keep them going.

Then there are Ken and Robert who do the majority of the grain haulage from the farm with their excellent team of drivers who handily are able to load themselves sparing either David, Andrew or I the task.

Chris is also around once a week for a few hours making sure that our rented properties are kept free from the encroaching countryside and that the garden is under control.

But before harvest can even happen we have Filip and his mother, a brother and two cousins who come every year from Poland to pull oats, docks and thistles and who really set the place alive with long hard days in the fields and some restrained (ahem) partying in the evening around the inevitable barbecue.

I know that she would much prefer to be in the fields painting, but the most important person on the farm is in the office on a Wednesday without whom none of the above would get paid and she is Jenny who helps me with the endless bookwork for a day a week, or for however long it takes.

Then we have all the people who rent buildings from us, either redundant farm buildings or buildings that are surplus to requirement. They are all small businesses employing local people from the neighbouring villages and I would estimate that there are no less than twenty five people here at any one time doing all manner of work from car repairs to catering.

Lastly and possibly the most fun lot of people who regularly visit the farm are the school children who my wife Alice busies around the farm turning tractors into maths lessons, hedgerows into spelling tests and the woods into games pitches. Sometimes we even tell them about how farmers are actually engaged in food production! I know, it's ridiculous, I forget myself sometimes. Anyway, there's usually about thirty five of the little varmints.

The list could go on and on if you took into account mechanics mending machinery, conservation advisors, soil samplers, solicitors, accountants or my friendly bank manager. The fact is that on any day in the summer there could be up to eighty people on the farm either helping us produce food, managing and enhancing our natural assets, being educated or people providing employment for local villagers.

I have one of my Grandfather's wages books dated 1953 in the office with fifty four men on the payroll all categorised into "ploughman, thatcher, gamekeeper" and the like, and although I do only employ "two full time staff" there are a still large number of people on the farm today who are contracted in to do specialist jobs, coming and going in a whirlwind of activity making the place feel far from soulless.

So, there's nobody on the farm these days? Wrong, the farm is busy, alive, diverse and exciting just as it was sixty years ago.

*From my NFU blog page: John Pawsey farms 700 hectares in Suffolk with a further 300 hectares under farm management contracts, all farmed organically, with two full time staff and three tractors.
Posted by John Pawsey at 11:18