The Prince and the Porker 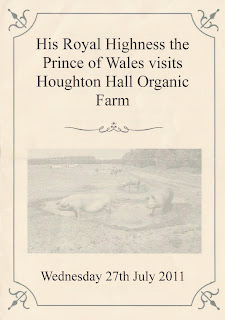 I met Prince Charles yesterday.
I am part of a group of East Anglian organic cereal farmers who through Organic Arable (see http://www.organicarable.co.uk/) currently provide 75% of all the organic cereals and pulses to BQP, British Quality Pigs, to feed their porkers, who are then sold through Waitrose under the Duchy Original brand.
Selling organic combinable crops locally has always been a bit of a challenge and having to haul wheat and beans down to the West Country not only adds lots of food miles, but also costs a lot of money. The BOCM Pauls mill at Burston is roughly 35 miles away from us and it is where BQP have all their organic feedstuffs milled. So it seemed sensible to start talking.
However, finding a local market was not the only aim of the group, we also wanted to address price volatility and try and establish a long term relationship with a buyer.
BQP were looking to address price volatility as well, but they also wanted a more stable supply of local British organic cereals and pulses with guaranteed provenance.
In June 2009 the group met with Alison Johnson, the Technical Development Manager at BQP and started to bash out how a deal could work.
Alison turned out to be a very positive person to deal with and it wasn’t long before we came up with a formula that encompassed all our needs, ensuring that the price we were paid was fair to all.
The component parts of the pricing consists of three equal parts:
Andrew Trump, the Managing Director of Organic Arable sent spreadsheets around to the group, so that our group cost of production could be worked out, which in turn gave us a useful benchmarking tool. More importantly, this part of the pricing addresses the potential of increasing, or decreasing variable and fixed costs of the group.
We all felt it necessary to link the price to the conventional market but because it only reflects a third of the cost structure it works as a price volatility suppresser.
The “meat basket” price is the retail price that BQP is paid by Waitrose for the whole pig. By including this as a third of the calculation means that if the supermarket drops that price, BQP will pay the group less for our crops, but of course it works the other way as well.
Harvest 2010 has been our first year using our marketing formula and I have to say that although it needs a slight tweak, it has done exactly what it was supposed to to. It has taken the highs and lows out of the market, ensured that we have a local market for all of our combinable crops and BQP have a feed for their pigs which is sourced from local British farmers at a price that we can all afford. Waitrose are happy too because they know that all of their Duchy Original pork has a guaranteed provenance, where the whole supply chain has had a fair deal.
And was Prince Charles happy? Yes he was, and he told us so.