Get On My Land! 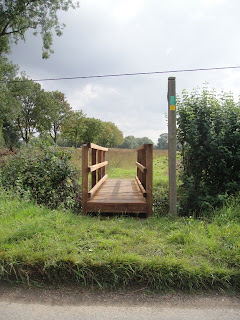 Get On My Land!
In 1998 I wrote an article for the Suffolk Preservation Society’s magazine ahead of the Country Landowners Association’s failed attempt to bring more land into voluntary public access under their publicly funded Access 2000, designed to ward of the Right to Roam. The Ramblers’ Association were predictably sceptical about the CLA’s attempts and their assistant director at the time David Beskine was quoted in The Independant as saying, “Access 2000 has been a sham from the outset. It has been running for more than two years and yet the CLA cannot point to a single acre of land where the public has been given new access.”
My article was entitled, “Public Access - A Farmers View” and read as follows:
Farmers are territorial animals and like to stamp their mark on their land, and I’m afraid that I am no exception. When I was eventually given a free whip on our family farm I developed an eagle eye for walkers enjoying their freedom to traverse my new territory. One foot off the footpath and they suffered the full effect of my wrath, “Get Off My Land!” People on horseback were my pet hate and I would watch them from a distance and wait until they strayed. Screaming through the gears of my Land Rover I would arrive scarlet faced, voice trembling with anger and demand that they should, “Rejoin the bridleway immediately!”
It was beyond my comprehension why a law-abiding citizen would leave his house an innocent man and criminalise himself by straying from a public right of way.
One Sunday my energetic wife suggested that we might like to walk to the pub at lunchtime via the footpath across my neighbour’s farm. Half way there the footpath suddenly came to an abrupt halt in front of a large field of wheat. There was no footpath sign and no evidence that the path carried on. My wife informed me that the path should go straight across the field and proceeded to walk across the growing crop shouting, “I hope your footpaths are in a better state than this one!”
The next day I bought an Ordinance Survey pathfinder map and discovered where the true public rights of way were on my land and to my horror I found that they were incomplete and poorly signed. The penny dropped.
A February article in the Farmers Weekly entitled “Footpaths: obstruct at your peril” said that “some landowners feel that a public right of way is no more than a conduit for legalised trespass” and this was the attitude I subscribed to before I began to walk my local footpaths. The long and short of it is that a public footpath is just that, a path that the public are entitled to pass along just as a public road is a road that the public are entitled to drive their cars along. The only difference is that although a landowner might struggle to divert a B road that dissects his farm he can divert an awkward footpath, so there really is no excuse.
If the Country Landowners Association are planning to produce a national register of public access sites as part of it’s Access 2000 scheme to persuade the government that the statutory right to roam legislation is unnecessary, we had better make sure that our footpaths and bridleways are open, or our argument is going to sound a little thin.
Needless to say Access 2000 was not a success and even today farmers attitude to public rights of way are arguably no different to those cited in the Farmers Weekly at the time. It is no wonder that walkers groups still get hot under the collar over the attitudes of some landowners.
Before I wrote that 1998 article I had just successfully diverted a cross field path with little or no opposition, and although the operation took two years to complete and cost in the region of £1,500, in the long term the time and money is a small price to pay.
This year I successfully concluded another diversion and a creation with only a single local objection to the diversion. The creation fills in the gap on the St Edmunds Way which I did allow under permissive access, but now it officially a Public Right of Way and runs adjacent to the drive to my house.
The only positive recognition I have had locally for the new footpath is an email from the Chairman of our Parish Council who congratulated me on the new bridge I have put up over a deep ditch, but the surprise came in a letter from the local Ramblers group. It read as follows:
Dear Mr Pawsey
I am the Local Footpath Secretary for the Ramblers Association in this area of West Suffolk.
It seemed appropriate to write to say how much our Association and the Bury St Edmunds Group appreciate the creation of Footpath 12 on your land, which fills a missing link in the St Edmunds Way. This is part of a long distance footpath across Suffolk.
You probably felt like ourselves that it takes a very long time to resolve local objections, such as those affecting changes to Footpath 9 that delayed the creation of Footpath 12.
The new footbridge where the footpath joins the Shimpling Street road C686 is very impressive. We would be grateful if you would pass on our appreciation to your fellow Director when the opportunity allows.
Yours sincerely
Brian Bagnall
Love or hate the Ramblers in my experience they are the people who always stick to the footpaths, don’t bring hordes of dogs to foul the path for other people and have a genuine interest in being in and enjoying the countryside.
To see from my tractor cab a trial of people appreciating what the great outdoors has to offer come wind, rain or shine brings a warm glow.
Brian Bagnall……...Get on my land!
Blog for National Farmers Union website - August 2011
Posted by John Pawsey at 02:55