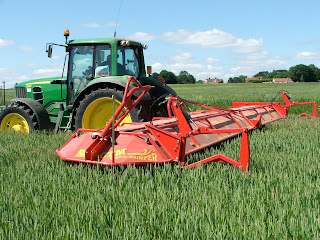 I have an old wages book in the farm office from 1954 which shows that we had 55 people working on the farm at that time. It’s hard to imagine what the atmosphere was like when my Grandfather instructed his farm Forman in the morning in front of five football teams worth of men, giving them instructions for the day.
Nowadays we are only three lonely souls, coursing the fields in our modern hermetically sealed tractors, doing the work of eighteen men in more comfort than those in the fifties could have only dreamt of. To overcome the boredom we do still have CB radios in our tractors so that we can pass the time of day with each other or with neighbours if they are similarly equipped, but it can surely be nothing compared to the banter that used to go on with that amount of men on the farm.
Since I have been farming organically there is a time of year when we do have more people on the farm and that time is now; roguing time. Usually we have a team of eight who take a month to rogue the more lightly infested fields of wild oats, docks and thistles, while the more heavily infested fields get cut with our weed surfer. The weed surfer is basically an eight meter wide mower which we dangle over the top of our crops chopping the seed heads off weeds, hopefully before they become viable.
In the case of wild oats, you basically have a week to ten days to cut them after flowering before the seed becomes viable. Unlike wheat, they flower from the top down, so we have tended to go in early to cut those top ones as soon as we can and then go back ten days later to cut the lower ones which now protrude above the crop as then stem continues to grow. You also tend to get the tillers which have grown above the crop by the time you come in again for the second time.
We have been weed surfing for three years now, and although we have not got rid of the oats in our more weedy fields, for the first time this year I think that we are starting to see a drop in their population.
The other weed that the surfer has been good at controlling is charlock. We have had fields with swathes of the stuff, and now the majority of those fields are clean.
It has also been good at dealing with creeping thistle populations as the surfer chops off their flowering heads preventing them from seeding and weakening their rhizomes.
Although I have been very pleased with the results from the weed surfers to date, they are really most useful in fields where it would not be economically viable to rogue them.
There is no doubt that taking the weeds off the fields by roguing is the best way to make sure that the field remains clean.
A combination of the two methods is perfect. We get some work to do ourselves in a slack period before harvest, and we also get the friendly banter of our summer visitors. Okay, it’s not three football teams, but it’s nearly a team!
Blog for National Farmers Union website - June 2011
Posted by John Pawsey at 11:13