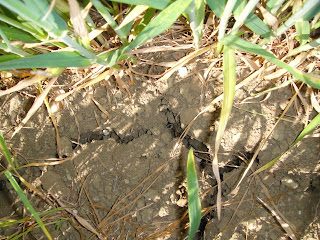 In 1997 I ran the London Marathon. There were several reasons for running it. Firstly, a great friend of mine had died of cancer a couple of years before and it was a way of raising money cancer charities. Secondly, I had been a long distance runner at school and had always wanted to do a marathon and thirdly, I had accepted the challenge from a friend to run it with him whilst hideously drunk late one Saturday night in November 1996.
So, I committed myself to 6 months training over the ensuing months to prepare myself for the ordeal the following April. Helpfully, 500 acres of the farm is on a former world war two airfield, and so rather than splash my way around heavy clay fields over the winter, I did most of my training on the relative luxury of the hard surface of the old perimeter track.
There was a downside though. All that running on such an unforgiving surface caused me to impact one of my hips one month before the marathon, which mean’t that my training had to be curtailed before the event and I ran the actual race heavily under the influence of ibuprofen.
When this Christmas I nearly hit 14 stone, my thoughts turned to running again and I made a New Year’s resolution to loose 2 stone. However, this time there would be no more training on hard surfaces in case my hip complaint resurfaced. I would old run on the network of farm grass tracks and headlands which should soften the impact on my bones.
Well, a fat lot of good that has been! Not having had any proper rain since February has mean’t that the whole farm has gone down like a road. I’m just as likely to suffer from a twisted ankle as well as an impacted hip as I daily try and negotiate the fossilised hoof prints that the local hunt have left for me to negotiate.
God only knows how this dry weather is going to impact on our yields. I suppose the only consolation an organic farmer has is that we haven't spent any money on fertiliser and chemicals, but we’ve still prepared the seedbed, sown the seed and been through a couple of times with our harrow comb weeder and inter-row hoe.
I thought it only prudent to adjust my expected yields down by 20% to see what happens to our cash flow for this winter, but it we don’t get rain in the next two weeks, I might be revisiting those figures with further reductions.
However, there’s no point in worrying about something that you can’t do anything about…..
I woke up this mornin’
The sun was in the sky
It hadn’t rain for weeks
The ground was awful dry
I got the Dry Weather Blues
D R Y Dry Weather Blues
It’s definitely getting to me.
PS I’m now 11 stone 7 pounds!
Blog for National Farmers Union website - May 2011
Posted by John Pawsey at 07:17