PGRO is Getting Rusty 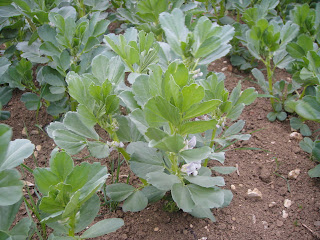 It was with trepidation that I walked my crops this morning after a week of days with daytime temperatures rising consistently over twenty degrees centigrade, preceded by heavy overnight dews. I had half expected to see rusts rampaging through my crops with gay abandon, but it was with great relief that I found very little disease. It’s probably been hot enough to arrest some yellow rust development, but we are clearly not out of the woods yet.
Possibly the biggest worry is the potential for brown rust in beans. A few years ago it swept through our bean crops reducing their yield dramatically almost to the extent that I considered mowing the crop rather than harvesting it. Even my conventional neighbours seemed to struggle with getting on top of the disease. I would suggest that that year brown rust cost the UK bean farmers a considerable amount of money.
It is then surprising that the Processors and Growers Research Organisation (PGRO) do not even score bean varieties for brown rust. Their 2011 Pulse Agronomy Guide simply says “all varieties are susceptible”, and thats that. It then says, “Fungicides such as tebuconazole, cyproconazole, azoxystrobin, metconazole and boscalid + pyraclostrobin may improve yield in either winter or spring beans, but treatment is unlikely to be worthwhile if infection begins when pod fill is complete and the crop is beginning to senesce.” Well, thats a fat lot of good for an organic farmer and next to useless for a conventional one.
It seems to me that we need much more research and development into field bean varieties than what we have at the moment, with some robust disease resistance. At present we only have five winter bean varieties to choose from on the PGRO recommended list, bred by 3 breeders. Not a lot of choice from not a lot of breeders.
In a time when the world’s demand for protein continues to follow an ever increasing upwards trend, I am continually amazed why we do not put more importance on the most popular protein crop grown by British farmers. Beans are what we can grow well, but we still dabble in alternative protein crops, diverting important R&D money into lupins and the like, instead of improving on what we grow best. It’s all bonkers.
When the wheels fall of a tight wheat rape rotation and farmers are struggling to find an alternative break, PGRO will be ill equipped to provide it’s levy paying farmers with an alternative unless they pull their finger out now.
It’s time to wake up and join in the old refrain,
“Beans, beans are good for your heart,
The more you eat the more you………”
Apologies, but it’s currently a popular rhyme with my seven year old. I obviously had nothing to do with teaching her such puerile lavatorial humour.
Blog for National Farmers Union website - April 2011
Posted by John Pawsey at 04:28