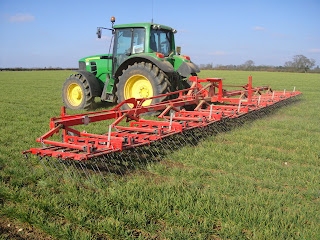 I know that it’s not a very environmentally friendly thing to wish for, but I’ve been itching to get out there and burn some red diesel.
It has been torturous watching all my neighbours spraying and putting on fertiliser over the last few weeks, when it has still been too wet for us to get on with some hoeing. But at last the ground is dry enough and this week we started with a vengeance.
All our cereals and beans are drilled on twenty five centimeter rows, and we inter-row hoe everything at least once with our Garford hoe with Robocrop guidance. Basically it’s a steerage hoe but without the bloke on the back grappling with an old iron steering wheel desperately trying to avoid hoeing out the crop rather than the intended weeds. No, our hoe has a camera mounted on the frame which picks out the rows of crop, and in an instant reports to a complex set of hydraulics which keep it in-between the rows leaving the wheat untouched. With our RTK guided tractor, you are able to spend most of your working hours facing backwards to see the system making continuous fine adjustments, ensuring accuracy at all times.
Our other form of mechanical weeder is the good old harrow-comb. To be honest it’s pretty useless for getting any weeds out that I worry about, but at this time of year when the cereals are tillering, loosening a little bit of soil around the plant does mineralise a bit of nitrogen. It all helps at a time of year when our organic wheats look pale in comparison to all my neighbours lush green freshly fed fields.
Ideally, we like to hoe the fields first and then go through them a few days later with the harrow-comb. The harrow-comb can help stop hoed weeds from re-rooting by knocking them about again, and can dislodge any weeds that were not quite up-rooted with the hoe.
Some of our fields are coming back into their fertility building phase this autumn, and so the last pass with the harrow-comb will also under-sow red clover. Under-sowing is always a tricky thing to judge. You don’t want to go too late as the soil can get too dry for the clover to germinate and the crop canopy can be too developed and can smother the small clover plants. You also don’t want to go too early as red clover can be very competitive and can swamp the crop to be harvested. This reduces yield and makes combining very difficult. So, at the moment I have no idea when sowing will happen, but it will be some time just before I think that the crop is too big to harrow and the ground is damp and friable enough to get some soil around the clover seed.
There is no doubt that weed free fields, it that’s want you’re into, are best achieved with a chemical bottle; but it all comes at a cost which you have little control over. Although I am unable to control the cost of red diesel, my variable costs are a given year on year, which not only helps cash flow, but takes a bit of risk out of the game.
You’ll all be doing it soon!
Blog for National Farmers Union website - March 2011
Posted by John Pawsey at 09:10