They Didn't Teach Me That at College 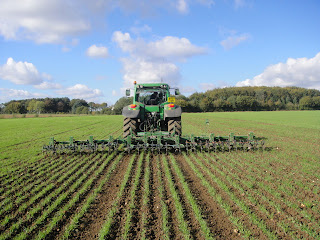 I’ve just returned from the Organic Research Centre’s annual 2 day conference held near to my old Alma Mater, The Royal Agricultural College near Cirencester. It is a conference that I try to go to as it is always held in January, and at that time of year I usually have time for re-evaluation and consideration, and the conference is a great forum for new ideas and solutions.
Being so near to my former college where I learn’t about how to farm conventionally, I started to think about some of the questions that I have had to answer since I started farming organically that I had not been taught in the early 1980‘s.
Building fertility is possibly the biggest challenge to any stockless organic system. There are a myriad of nitrogen fixing plants to choose from out there, but which one will do best on your soil type? Should it be in the ground for 18 weeks or 18 months to provide the most fertility? Can it be under sown in a cereal crop or is it too competitive and will swamp your crop before harvest? How much nitrogen does it actually fix and how much is available to the following crop? How many following crops will that fertility ley support?
Phosphate is another worry. Like your Triple Super Phosphate, our Rock Phosphate comes from Morocco, but unlike yours, most of our phosphate is not available to the plant in the short term. So, what plants can you use as a green manure that make that applied phosphate or the unavailable phosphate that is in our East Anglian soils available? Do different varieties of wheat manage to make available more of the existing phosphate in our soils?
As far as my college lecturers were concerned, weed control came out of a bottle, so having been used to jumping onto a sprayer to deal with a problem, keeping my farm rid of the nasties was another head scratcher. Having a proper rotation and drilling a bit later does help with some weeds, but the market around here is for wheat, barley and beans and you can’t leave autumn drilling too late on our heavy clay soil. I have invested a huge amount of time and money into novel forms of mechanical weed control and now all our crops are sown on wide spacings and are hoed with a laser guided hoe, which is drawn by a tractor with RTK guidance. For the last two years we have been working with a company to develop a mower that will cut the heads of wild oats and other competitive weeds before they seed in a standing crop.
So, there are solutions out there, but in the main the organic farmer has to solve many of the problems him/herself, as funding for research into organic farming systems is almost non existent. I remember coming out of lectures at The Royal Agricultural College weighed down with government funded research booklets on how to increase productivity using artificial fertilisers and pesticides. I often wonder what state our industry would be in today if the same amount of money had been invested in organic farming? They certainly wouldn’t have dumped all that sewage sludge in the North Sea.
Blog for National Farmers Union website - January 2011
Posted by John Pawsey at 03:15