The Axe of Decontrol 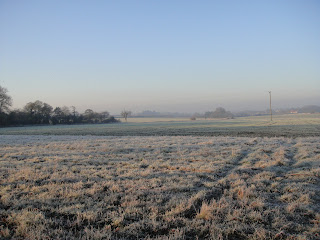 Having a muck out in the farm office is not something I look forward to. It is usually spurred on by recognition that the piles of papers on my desk are not only teetering, threatening daily collapse, but more importantly, may contain a frightening bit of DEFRA legislation that has been hiding in there for months with a due date looming large. However on this occasion the office cleansing was prompted by both printers breaking in one day. The oldest printer began to spit small metal cogs out with every page printed whilst the newer one was broken by me slamming the lid down having replaced the ink cartridges for the second time that week due to my children's occupation of printing out full colour pictures of their favourite fluffy animal of the day.
So, two new printers arrived and space had to be made for the beasts, which involved desk tidying. Desk tidying inevitably involves a certain amount of filing, which in turn requires an amount of going through old files to make space for the new files. These all have to live in a filing cabinet that is so full that when the top draw is fully drawn out the whole thing lurches forward, momentarily threatening to chop your toes off. Note to self; buy steel capped boots for filing.
It was during the file cleansing operation that I came across an old Punch cartoon that I had saved when I had gone through my Grandfather’s desk when he died. The cartoon is dated June 15th 1921. The scene is of a farmer standing in a small copse. Having just taken off his jacket and hat, he is rolling up the sleeves of his shirt and is holding a large axe. There are three trees behind him all containing a legend. The first tree says “Guaranteed Price of Wheat” and the second tree says “State Control of Cultivation”, while the third tree, the tree that the farmer is squaring up to says, “Agricultural Wages Board”. Mr Punch, smartly dressed in a suit and trilby hat, has one hand protectively against the third tree and is pointing at the legend with his cane. Mr Punch is saying to the farmer “I’m all for the free use of that weapon of yours: but I should spare this tree. It’s worth keeping”. The cartoon is entitled “The Axe of Decontrol”.
Who knows why my grandfather kept the cartoon. Maybe he thought it was amusing?
Blog for the National Farmers Union - Originally published 15th December 2010
Posted by John Pawsey at 03:13