Just say NO to neonicotinoids 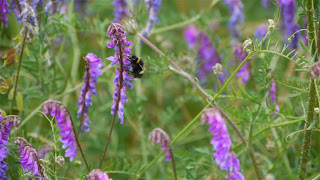 The first time I used a neonicotinoid on the farm was when British Sugar offered sugar beet seed with a seed dressing called Gaucho which contained imidacloprid, a neonicotinoid. It was a bit of a revolution as far as I was concerned because the threat of Virus Yellows carried by Myzus Persicae or the Peach Potato aphid hovered over our beet crop in it’s early growth stages and an infection could result in serious damage to the crop’s yield potential.

The solution before Gaucho was usually a succession of early forays before bees were foraging into my beet fields with the sprayer and an insecticide to deal with the problem, or even a dusk spray if early morning bright sunlight or frost mean’t that the spraying in the morning might risk damage to the young beet leaves, but also avoiding bees at work.

With Gaucho all those unsociable hours could be avoided by having the seed ordered with the neonicotinoid dressing and to top it all, because Gaucho was a seed dressing and not a spray, bees were now protected from any spraying which might have formerly strayed into foraging hours. Result! Or was it?

I do remember having a conversation with my agronomist at the time about how the neonicotinoid worked and he told me that when the aphid fed on the sugar beet plant it also took up some of the chemical which disorientated it and made it stop feeding. By stopping the feeding it then prevented the aphid from transmitting the virus and hey presto, no Virus Yellows. As the plant grew the chemical remained in the plant which continued to offer protection. At the time I was entirely focused on the positive (or should that be negative) effect that this wonder drug had on the aphid, but I didn’t for one minute think about what effect that the chemical was having on other insects visiting my crop. It’s this unbalanced focus that affects many of us farmers when we are endeavoring to get all the jobs done that we have to do in a day and we often fail to see the wider consequences of our actions until someone from outside of our industry points them. When that happens we usually throw our toys out of the pram feigning doom and gloom for the future of farming.

That is where we are now with the proposed two year ban on neonicotinoids.

For me, when the whole neonicotinoid verses bee debate kicked off what my agronomist had said to me all those years before about the aphid on my sugar beet plant becoming disorientated rang alarm bells especially with the escalation in the chemical’s use since my sugar beet growing days. I’ve since listened to both sides of the debate, to all the convenient scientific arguments depending on who you are batting for and have come to the conclusion that all farmers should come to given our knowledge of how the chemical works. Neonicotinoids must be having an effect on our bees as well as other pollinators. My conclusion is not science based, it’s common sense based.

I applaud supermarkets and garden centres who have said; we don’t know if there is an issue here or not, but until we know that there isn’t a problem with neonicotinoids then we don’t want to be associated with the product.

I feel that we as farmers have missed a massive public relations trick here. Instead of hiding behind the doom and gloomsters who apparently speak on our behalf in the press and media who have warned of impending yield losses and even more environmental destruction we should be standing up and taking a leaf out of the supermarkets and garden centres book and we too should be saying No to neonicotinoids.

By the nature of our ever changing job we farmers have always had to be incredibly resourceful. In my farming career I have managed to overcome various challenges; farming more land with half the amount of labour and machinery, overcoming the straw burning ban with a different approach to straw incorporation and weed control, addressing the decline in farmland wildlife species with the help of environmental schemes and more recently as an organic farmer bringing in as much diversity into my rotation to mitigate against climate change as well as naturally finding ways of addressing pests and diseases and ultimately rounding my nutrient cycle by providing the major elements for crop growth with the reintroduction of livestock onto the farm.

Every farmer has a different story to tell and it’s usually more impressive than mine.

My point is that the banning of neonicotinoids does not necessarily mean more cost to farmers, loss of yield or more environmental damage but it will mean that we will have to think about solutions for ourselves rather than waiting for someone to provide them for us. Increasingly the concept of crop husbandry is being wrestled from our grasp by agronomists and agrochemical companies. We are becoming fearful and under confident of our own abilities resulting in us all running around like headless chickens every time a chemical ban is threatened.

We have always been a diverse and inventive industry and we should have the confidence to find solutions for ourselves and if saying No to neonicotinoids means that we gain more customers, achieve more resourceful farming community and save our bees along the way, everyone is a winner.