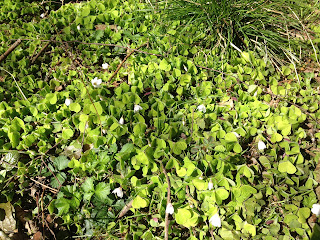 The first environmental scheme we undertook was way back in the dark ages with a pilot scheme called Arable Stewardship. If my memory serves me well it was trialled in two areas of the country, East Anglia being one and somewhere in the West for the other and it was the scheme that spawned what we now know as Entry Level Stewardship (ELS).

Since then we have been in ELS, the organic version OELS, and now as of this February we have entered into our second OELS agreement topped up with Higher Level Stewardship (HLS).

As the HLS scheme is competitive to ensure that we came up with an application that was attractive, we and various advisors spent considerable time researching not only the farm's historical story, but also what it has to offer as far as existing wildlife is concerned to determine how we can build on and preserve that inherited base. Without going into too much detail the agreement focuses on four main areas: farmland birds, wood pasture restoration, the reintroduction of livestock and educational access.

Key options selected for farmland birds include grass margins, field corner management, cultivated stubbles and a large area of pollen and nectar mix. With the changes in the scheme’s options after 1st January 2013 I was able to use the pollen and nectar option on larger areas than previously allowed. Being an essentially stockless arable farmer the leguminous element of the mix enabled me to use it for a dual purpose, providing food for the lower elements of the food chain as well as under-sowing it in cereal crops to improve fertility in my organic rotation.

I did have some fairly lively debates with my project officer about wether or not a large area of pollen and nectar was conducive to providing worthwhile public goods. My argument went as follows:

On the heavy clay lands of south west Suffolk there is a huge lack of any over-wintered stubbles, those important sources of over-wintered food for farmland birds. This is due to the fact that trying to achieve a spring seedbed without having ploughed before Christmas to get some decent frost action on our "loving” clay soil (once it's stuck on you, it doesn't want to let go) it is pretty impossible to do so without doing a huge amount of potentially soil damaging cultivations. However, through the under-sowing of legumes for our fertility building we have around 110 hectares of over wintered stubble every year.

In fact, one fifth of the farm is under-sown with red clover which provides two major elements as far as the farm’s wildlife is concerned, over-winter feed for birds through the gleaning of cereal and weed seeds left by the combine harvester and from our run-down plants in our weeding tram-lines and then subsequently pollen and nectar from the legumes flowers. Our farm is an oasis in this respect sitting in the middle of some of the most intensively managed land in Suffolk, and we are going to improve what we do even more by no longer sowing just red clover. The plan is now to sow all our fertility building areas with a pollen and nectar mix to maximise their environmental potential which will be predominantly unfunded by the scheme.

As far as addressing the historical and archeological element of our application we are restoring two moated sites which would have been the entrances to the medieval deer park which was Shimpling Park. Recognising those entrances lead me into researching more about where the boundaries of the park were in medieval times and how it has changed since. This meant looking for wood banks, pollarded trees and pouring over as many historical maps as possible searching for boundary suggestions. My search took me to the National Archives at Kew as the farm had at one time been part of the Crown Estate where I found many clues as to where the park was. My most exciting find was a huge estate map of the farm on vellum with subtle colouring of the different land uses and also the then field names many of which still exist today. Interestingly the part of the farm that is Shimpling Park Farm is pretty much the area of the whole park then, meaning that it is likely that it’s entirety has remained in single occupancy for hundreds of years. While I have no immediate intention to try and recreate the whole of the park, we are under HLS going to restore 25 hectares of wood pasture which will also be the catalyst for the reintroduction of livestock onto the farm and the start of my journey to return to a mixed farm enterprise.

The really fun part of our HLS application has been the educational access part of our scheme. Since becoming organic we have had numerous requests to do farm walks which have become a major highlight of what we do. While I take around groups of adults be they farmers, locals or other interested groups, my wife Alice has been hosting increasing amounts of school visits. With no suitable indoor area to teach the children we have had to confine most of those visits to when the weather is likely to be fine. That will all change now with an amount of money we have been given through HLS that will help us convert one of our redundant farm buildings into a classroom with loos and washing facilities. As I write building has stared, and although the farm yard has been turned into a hard hat area, it is incredibly exciting to see redundant farm buildings being brought back to life with the expectation of hoards of young interested minds who we can share our farming story with.

Do you know what, it really is an exciting time to be a.....I was going to say a farmer, but we are so much more than that now, aren't we?