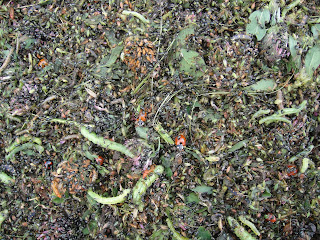 At the end of June this year my Organic Entry Level Scheme (OELS) comes up for renewal and so it’s time to decide wether or not I should be committing to another five years of organic farming.

Over the past two years it could be argued that I would have made more money farming conventionally depending on how clever I might have been in buying my fertiliser and marketing my crops, but over the whole five year rotation of my present OELS agreement there is no doubt that on average my organic rotation has been financially better.

The difficulty I now have is that going back into my fertility building leys I do not have the cushion of the Conversion Payments that I got first time round, and with a stockless system and therefore no income during that fertility building eighteen months, it makes my budget look a little on the lean side. So I have been considering other options to see wether or not I can tap into environmental payments under the Higher Level Scheme (HLS) that value the habitat that my leguminous fertility period and preceding overwintered stubbles provide, which will also fill in my own “hungry gap.” The picture (see photo) taken of the back of our mower cutting red clover last summer indicates that my insect population is extremely healthy and is providing a wonderful food source for insect eating birds. Surely that has a value?

But environmental schemes also provide me with a financial dilemma. Do they actually stack up when comparing the income you forgo taking land out of food production against the income you get from the various arable options that the scheme requires you to embrace?

The better paying options of Pollen and Nectar Mixes and Wild Bird Cover deliver £550/ha under OELS but with current organic prices where they are it is very difficult to find even an awkward corner or a north facing headland under a high hedge that doesn’t pay more than that. Having poured long and hard over five years worth of yield maps from our combine harvester I thought that unprofitable areas would leap out at me begging to be released into an environmental scheme, but it really was not the case. With Natural England’s budget as tight as a cow’s exhaust on spring grass there is little chance that we will ever get a just reward for the expense of entering into any of these options.

So if we are not going to be paid enough to cover income forgone then there must be another reason for favouring wildlife over food. Could this be what the National Farmers Union is thinking about when they talk about “Sustainable Intensification?”

I do hope so, because with all this worry about how we are going to feed all those meat hungry Chinese desperate for our decadent western diet, has made me start to feel extremely guilty about even entertaining the thought of not working every piece of my farm to with an inch of its life.

Actually that’s a bit of a lie as my aesthetic eye has always been more fulfilled looking at parts of the farm which have been allowed to do as nature intended which should possibly be incorporated into the field and be growing a crop. The continuous mowing of tracks, field edges, difficult corners and farm yards making the countryside all look a little bit clinical has never attracted me and it’s probably why I can stomach an organic farm in May when the black grass is flowering above my cereal crops, but it seems a bit mad why anyone would spend time cutting these havens when you can actually stick them into an environmental scheme and at least get something back for them. It’s also much easier to argue for environmental payments to the village farmer basher than trying to justify your Single Farm Payment unless you make it a habit of wandering the village in rags begging for a bowl of rice.

To argue that we are true “custodians of the countryside” we do have to prove to the general public that we are just that, especially if we want to get paid for being so. Unbelievably you do not get awarded the COTC Cup for investing in a shiny new sprayer, having wheat fields as level as a billiard table and providing wildlife habitat purely for game birds.

Being in the Organic Entry Level Scheme or the conventional version does seem to be very least we can do to show that we appreciate that there are some areas of the farm that should be production areas for wildlife. The scheme’s options may not cover the Barley Barons of East Anglia’s income forgone, but it might mean that we can continue to farm the rest of our farms in a responsively productive manner.

That is surely what we all want to get on and do.

Blog for the National Farmers Union