I feel a movement coming on

Movements are funny things and I’m not talking about a movement brought on by syrup of figs, I’m talking about a movement of thinking, of enlightened souls carving a new path, casting out the old with the new, capturing the zeitgeist of the moment. I’ve been caught up in a few movements in my time including Punk, the Campaign for Nuclear Disarmament and then the Organic one.

But there’s a new one, and they’re sealing all our words like, soil health, mycorrhiza, green manures and allelopathy. They are called Conservation Agriculturalists.

There are several different types of Conservation Agriculturalists. The lowest of the low are those who have just given up the plough for a cultivator, the zonal tillers. Next you get the strip tillers, they do a little bit of tilling during seedbed preparation but only where the seed is placed and they look down on the zonal tillers. The Mothers of Conservation Agriculture are the no-tillers, who would rather cut off their right arm that move a particle of soil to place their seed and they look down on everyone.

But the farmers that all Conservation Agriculturalists look down on are those of us who use the plough. That’s me, but I’m trying to stop, I promise.

I say that movements are funny things, they are actually not funny at all, they are earnestly serious but they do start off fun. Converting to organic agriculture in the 1990’s was a blast for me. I was no longer wedded to my sprayer receiving orders from my agronomist with his better-spray-it-just-in-case attitude, buyers were beating a path to my door as the market grew in double digits amid food scare after food scare and villagers hailed me as a local hero as barbecuing on a Bank Holiday in the Parish was now possible without me adding a cloud of free pesticide to their carbonised burgers.

Then It got serious when I discovered that I was in fact the lowly zonal tiller of the organic movement. I was stockless and arable. I also made other serious errors in attempt to win favour. Firstly I had too many acres to be properly organic, secondly I admitted that I had converted for financial gain, but the worst error I made was the fact that I was from East Anglia, the home of the Range Rover driving, shotgun swinging Barley Baron. Stamp Duty means that moving could be costly, so where should my practical aspirations lie?

Should I set my sights on the mixed organic farmer who looks down on the stockless arable farmer due to his lack of natural fertility building beasts, jealous of his ability to lie in at the weekend, merrily turn on his straw chopper when a single dark cloud appears in the sky at harvest time or mercilessly cuts and mulches perfectly good fertility leys only to plough them in? Or should I aspire to the organic God, the grower, the he/she with soil underneath their fingernails, the digger and harvester with their bare hands and purveyor of muddy vegetables directly to their customers in a rustic box? I am afraid that I will never be able to wear the crown of grower, but my recent livestock purchase has elevated me up somewhat and I now call myself, “Arable, with some sheep”.

It’s also not fun when you realise that your movement doesn't necessarily have all the answers, like when the Sex Pistols brought out The Great Rock and Roll Swindle, having a nuclear deterrent did and still does actually work and my inability to spray my beans with a fungicide means one year in five they do get chocolate spot, defoliate and die as bean-less stalks.

Having said all that, movements are incredibly important and no meaningful change has ever come about without a radical beginning usually started by a lunatic, tempered by diplomacy and delivered by compromise.

We have to recognise that just because our neighbours are doing something different to us doesn't mean that they are necessarily right or wrong, they are possibly trying to find alternative solutions to challenges that we all face which is to produce food profitably and hopefully impacting positively on the farmed environment. As farmers we need to stop looking over the hedge and start talking over it. We have so much to learn from each other.

To be sitting on a panel at the recent Organic Farmers and Growers National Organic Combinable Crops event with equal representation from the Organic and Conservation Agriculture movements was a first for me and it felt good. I suspect that we will always have points of difference in our production systems but that's a good thing for farming because it challenges us and gives our customers choice.

I am happy to give Conservation Agriculturalists some of our words, as long as we can have some of theirs. 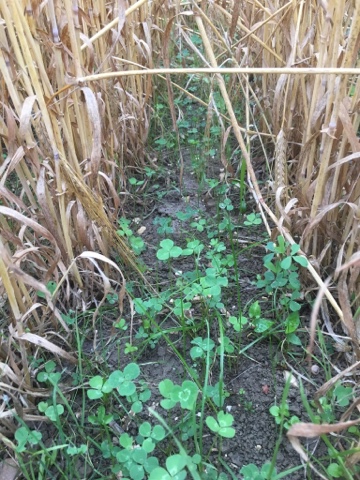